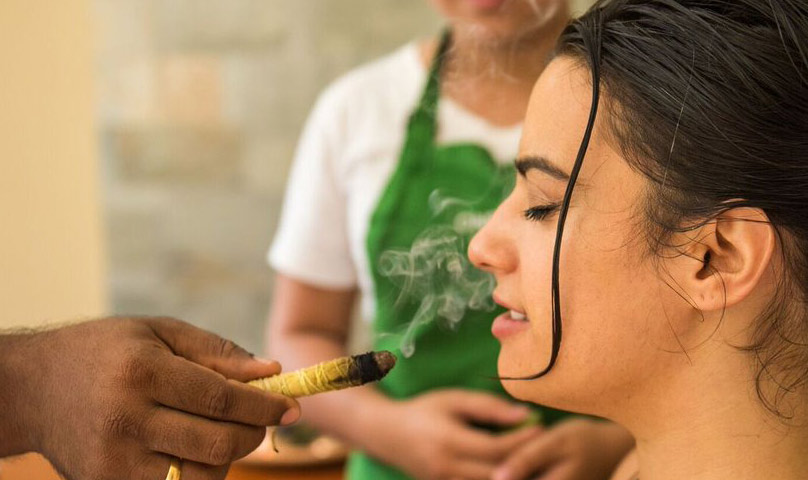 Medicated smoke has an important role in Ayurveda. It can be used to fumigate a room or it can carry to an individual the essence of herbs. Incense thus has healing properties. The smoke with its gandha or aroma activates the nasal system and through it makeschanges in the body and mind of the person.

The literary meaning of dhoopa is smoke or fumes. Dhoopa is defined as dhoopahthapeiti or that which comes out from fire. The fumes from fragrant materials like chandana( santala album), Aguru ( aquarillaagurulocha) , kumkum, ela( Eletarria cardamom) Kustha (Saussarrialapa) etc. give a soothing and pleasant sensation to the body and mind. Medicated fumes are sued based on their dhosha predominance. In vata conditions a mild kind 0f smoke from guggulu, mustha, vilwasmajja, sarjarasaetc are beneficial. In pitta condition, fumes from utpala, bnark of nyagrodha, kamala Lakshaetc are beneficial. In kapha conditions strong smoke from Jyothishmathi, nish, triphalaetc are useful.
During differnet seasons, different fumes are used. In the cold season fumes from ushnadravy like guggulu, aguru can be used to overcome the chill. During summer fumes from drugs of cold potency like lotus and chandana can be used to minimise the haet.

During childbirth the fumes are used to help delivery in two ways:

The smoke helps during delayed and obstructed delivery and also as an antimicrobial drug, Fumes from the skin of snakes are beneficial.

Adulteration: Adulteration of hard wood and other medicinal products used in dhoopa result in a bad effect to the atmosphere and the body. So one has to be careful when a dhoopa dravya is selected for fumigation.